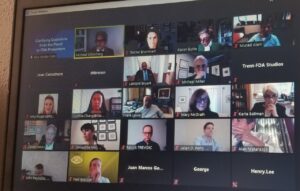 The purpose of the advisory panel hearing are:

(2) patient preference and informed decision making. FDA is convening this meeting to seek expert opinion on the clinical evaluation and regulation of dermal filler products.

The hearing was somewhat complicated because dermal fillers are considered Class 3 medical devices. Class 3 means that it is “life saving” or “life sustaining” and if a patient develops adverse events, they cannot sue the manufacturer.

According to FDA there has been a marked increase in adverse events relating to dermal fillers, particularly vision impairment, blindness, and stroke. The theory is that any filler injected into any part of the face can embolize and migrate to the blood vessels and thought to result in partial or complete interruption of blood flow to the central retinal artery. There could also be inadvertent penetration of the arteries in the face by the needle or cannula. It is for this reason that I recommended to FDA to use image guided injection. I also brought up post monitoring to follow up with the patient to make sure nothing migrated or ended up where it wasn’t supposed to.
Hyaluronidase is used to melt filler that causes adverse reactions but the hyaluronidase is causing even more problems. Hyaluronidase is a medication and the filler and delivery system is considered a device so adverse reactions would be reported to two different post surveillance systems. I advised FDA to streamline those two systems so all information from both will be in the same place. We aren’t using accurate numbers if reports are in two different databases.
There was talk of issuing medical device cards to patients that has the name of the filler, the means of delivering it with the patient’s name, contact info, manufacturer contact information and a list of possible risks. Often patients are not told what they are being injected with so I think it might be helpful to have that.
Also risks should be conveyed both verbally and written with a checklist that the physician and patient both sign off on as having been discussed and read so there is informed consent. The language should be clear and specific so there is no confusion. The majority of patients harmed by dermal fillers report that they were never given clear possibilities of risk.
One thing I must speak out about is that the panel chairman Dr. Frank Lewis ignored me when I raised my hand. I had to message him to tell him it is unacceptable to ignore the consumer representative but allow the physicians on the panel to talk as long as they wanted. This also happened when I was the consumer representative for the breast implant hearing 2 years ago. I pulled him aside during break and told him it’s disrespectful and unacceptable to silence a consumer representative. To his credit, after pulling him aside both times, he did call on me when I wanted to talk. It shouldn’t have to be this way though. All panel members should have an equal seat at the table. 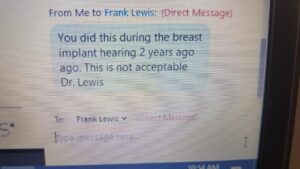 To listen to the hearing in its entirety, click here. 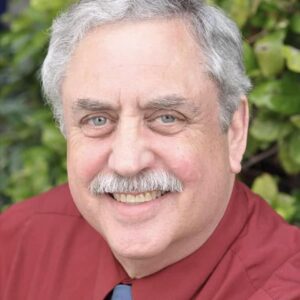 The world’s light dimmed today on those of us who were gifted to have known him. I heard of the passing of my friend Ed Hollingsworth this morning.

People come into your life for a reason. You know that person who just stands out for all the right reasons? That was Ed.

The first time I met him was at a Consumer Reports conference in Washington, DC. It was the first time I dipped my toe into the patient safety waters. New to this and quite honestly a little intimidated being surrounded by the best patient advocates across the country, I kind of wondered how I got to be around such stellar talent.

People were gathered in small groups when I walked in and I tried to find the table with the least amount of people to carve out a little space. They all knew each other, almost like a family reunion. I didn’t know anyone and even though it’s hard to tell when the Jersey in me comes out- or when I go off on a rant- I’m actually quite shy at first. Painfully so.

I sat at that table feeling out of place. I don’t know if my awkwardness was obvious but over comes a big, smiling guy. This sounds so cliché but his smile really did light up a room. He introduced himself as Ed and sat down next to me. 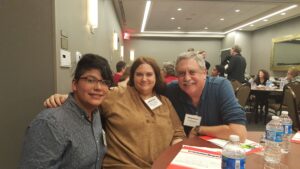 The above photo is Daniela, me, and Ed.

It was small talk at first. He maintained eye contact but I noticed he occasionally looked off to the middle of the room, and smiling even bigger.

“See her?”, pointing at his wife Marian, who was close by and talking with other people.

She is exactly that.

I remember his smile so well. It was a smile that spoke so much but in no words. There was a sparkle there. I couldn’t help but chuckle a little bit because it was a blend of school boy crush and a love you only see in movies and wish to aspire to.  Best friends. Two people in one soul. It sounds weird to say of a couple you just met. There was something so genuine and precious there.

I don’t really remember how we got on the subject of chocolate. It was probably some piece of bagged mini candy bars on the table but he said “You want to see chocolate? My wife makes THE BEST”. I scrolled through his phone looking at boutique-level gorgeous chocolate covered Easter Eggs and Reece’s dipped in chocolate and toffee. He made a little quip about how he shouldn’t be eating it (patting his stomach) but said he just couldn’t help it.

His wife Marian finished her conversations and sat next to Ed. I noticed he held her hand on the table. That memory sticks with me when I think of Ed.

Before the conference officially started, he leaned toward me and said “We’re all family here. You included”, and then the conference speaker started speaking.

I remember at some point the conference ended for the day. We were in a hotel lobby waiting on delivery food.

Ed was sitting down and I had arrived a little late. He stood up and offered the only seat available at the table. As people were getting annoyed by the late food delivery, the seat next to me opened up. Across from me was Robyn, a survivor of patient harm. I remember Robyn started singing. It was beautiful and soulful, just like her, and Ed started singing along with her and he had the biggest smile. Their voices intricately woven and blended when they sang.

That’s when I found out about his and Marian’s love of theatre. In high school I remember the plays the drama department did. I got to watch a lot of them back stage as prop department person number 3. I mentioned a couple songs I remembered from them and he knew them all by heart. He was an actor. As he showed me photos of performances, he hummed some of the tunes.

As an aside, we did get the food we ordered but it’s the people and the music that sticks out.

When the conference ended, we all hugged and went our separate ways. Ed was right. We became family. It’s been a while since we all got together but you wouldn’t really know it because the bonds are strong.

Ed posted all the time about his walks with Marian in their neighborhood. I can still see the vivid sunset pictures. One photo that I remember clearly is an un-posed photo of her and a dog. He expressed how much he loves his wife and how she is his best friend.

Another conference came up not too long after the first one. This was in Yonkers, New York.

It is at this point I need to mention that during those years I had a wicked flying phobia.

My flight had been delayed because of a hurricane so I flew out the next morning. I posted a photo half in jest, half in needing moral support. It was of me. Terrified.

Because my flight was delayed, it was the day after I was supposed to leave. I calculated that I’d arrive at the airport in New York, catch the driver and be delivered to the steps of Consumer Reports riiiiight about when it started. I was right. It started minutes before I walked in. The introductions had just started. 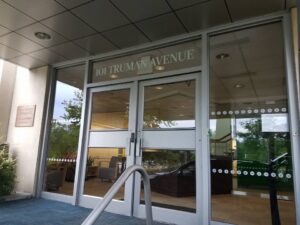 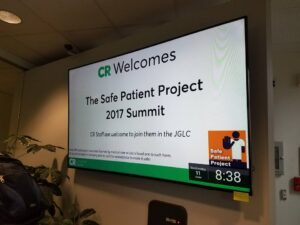 As you can imagine with any phobia, I arrived at Consumer Reports pretty rattled. I was escorted by someone at the front desk. The room was packed. Except the seat next to Ed. In the middle of intros, he stood up and gave me a gigantic hug. It was the kind of hug where you felt safe. Home.

Marian stood up, smiled, and hugged me too.

During one of the breaks, I saw that Ed had his arm around Marian. I don’t know why but I felt so compelled to take a photo. 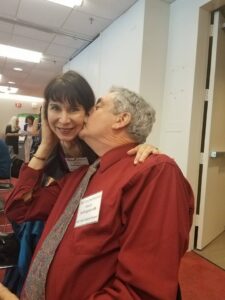 I’m glad I did. This would be the last one I ever take of him, at dinner. 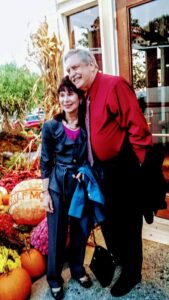 In my mind, I still remember how he playfully “made fun of me” for being THAT person taking photos like a tourist. I smile at that. I am that person.

I knew he was sick recently. Not a lot of people did. I don’t think I knew the full extent of how fast his cancer was. But I knew his posts were less frequent and with less spark than before. I knew why.

He last posted in early to mid-September. I went back and read them again this morning.

The announcement I dreaded, that Ed was extremely sick and Ed’s family asked friends and family to post for Ed, broke my heart into more pieces than I knew I had. Marian read Ed the messages. If there is any comfort at all in this, it’s that Ed knew he was loved by all.

Even over time zones and many miles between us, it was like the air got sucked out of the room when I read this news.

I hadn’t prepared for that kind of spark to go out.

Ed was the strongest, most genuine, friends-into-family kind of guy. He spoke his mind. But had a compassion unique to him. A smile that is only his.

I got word last night that Ed passed, surrounded by his family.

I had this all written in my head before I started typing. It was a lot more eloquent than this and I’m sobbing at the loss of my dear friend. I got to know Ed and his family. You won’t find anyone as dedicated to his family. They are his center.

Damn, Ed. You had a way with words and the right ones elude me right now. I look back in my Facebook albums and Ed and Marian are smiling in every one of them.

Thoughts and prayers seem so small as I’m writing this for a man who loved his life.

The sky has one more star named Ed.

Rest in peace, my friend. 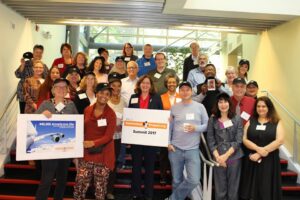 It was recently announced by Jennifer Tucker, my former co-director on The Strings Attached documentary that she pulled the plug on the film and has made public, libelous (criminal) allegations that I tried to hijack the project from her. These allegations are absolutely false. It is against my own personal ethics and professionalism. My professional reputation speaks for itself.

I am disappointed and hurt that she would make such an egregious accusation.

If she decides to complete the The Strings Attached Documentary on her own, it is a film I will still support from the sidelines.