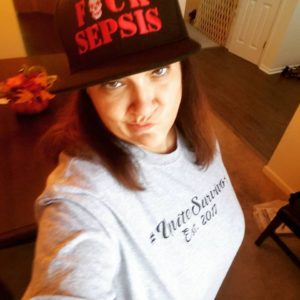 Throughout my years in patient safety, I’ve been to many meetings, conferences, and summits. In those years, I’ve been introduced to patient safety leaders involved in reducing sepsis and raising awareness about it. Being in the field of antibiotic safety, my work often crosses with advocates regarding infection control.

I have these people to thank for saving my life.

I have to admit, prior to meeting them, I didn’t know what sepsis even was. But one thing that always stuck with me after the meetings was the phrase “Could this be sepsis?”.

I just found out how asking that question could save your life.

Let me back track a bit and explain how this became personal for me.

I broke my ankle in 3 places and ruptured 5 tendons. Repairing it required extensive reconstructive surgery. I had three incisions. Two weeks following the surgery, I developed an infection. The incisions were blistery, peeling, red, swollen, and leaking some kind of fluid. In addition, I had a very high fever. Taking the advice of a nurse friend, I had it checked out and I was treated for infection.

I didn’t give it a second thought until one day after physical therapy a few weeks later. Later that night, my ankle was red, swollen and leaking. I wasn’t alarmed about it until I had the chills so bad that it looked like I was having a seizure. My breathing and heart rate became rapid and I was hallucinating.

This felt different than the last time I developed an infection.

I went to Carolinas Medical Center in Charlotte, North Carolina.

I remembered that crucial phrase from my meetings, “Could this be sepsis?”

I didn’t realize I’d said it out loud until someone said “Yes, it could”.

For those who don’t know, Code Sepsis is a protocol in which a patient is given fluids and antibiotic therapy within three hours of triage. For their compliance with Sepsis protocols, Carolinas Healthcare System was named a 2015 Sepsis Hero by the Sepsis Alliance.

I met several people from the Sepsis Alliance over the years. Thanks to the protocols they helped implement, I survived sepsis. It is not lost on me that I developed- and survived- sepsis during the month of September, which is Sepsis Awareness Month.

From what we can piece together, one of the three incisions was not healing properly and it opened me up to infection. I contracted MRSA at a physical therapy facility. It then turned into Sepsis. Luckily it was caught early and I was home within the week.

For more information about sepsis and the Sepsis Alliance, click here. It may just save your life. It saved mine.