In the United States, someone is sexually assaulted every 73 seconds. 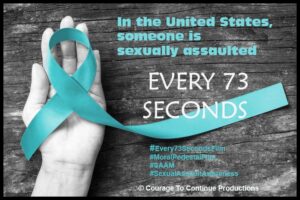 To address awareness about sexual assault and prevention of it, Sexual Assault Awareness Month was created over 20 years ago.

Sexual Assault Awareness Month (SAAM) is an annual campaign in April to raise awareness about sexual assault, support survivors, and give a safe space for survivors to share their stories. The color teal was adopted as the official color for sexual assault awareness.

April 6, 2021 was SAAM’s Day of Action for which people were asked to wear teal. 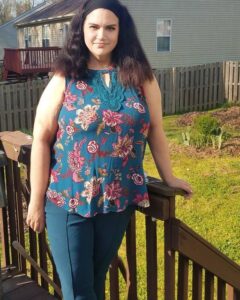 On April 28, 2021, it is Wear Denim Day to support survivors of sexual assault. 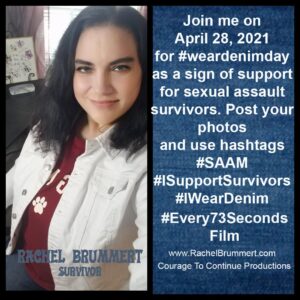 Denim Day is an annual event to support sexual assault survivors. It originated in Italy, when in 1999, a convicted rapist of an 18 year old female appealed the conviction and it was overturned by the Italian High Court. They blamed the victim because she wore tight jeans.

As a sign of protest, women in the Italian parliament wore jeans to work.

This was picked up internationally as a way to protest all the myths about why people are raped.

Sexual assault awareness is extremely important and it is clear why it is needed. It is not possible to prevent something no one really knows about or understands. Add to that, it’s also difficult to make people aware of a problem without providing a solution.

Assaulted By a Cop

In 1991, I lived in a small town in Pennsylvania. The whole town was about one mile square. It had a small police force and small fire department. Living in a small town, everyone knew everyone. I really enjoyed living there….until “that day”.

As I did every day, I went for a walk around the neighborhood. As they did every day, a police officer would stop and check on people they see, say hello, make sure they’re okay. I’d always hear them coming because the brakes on the police cars were squeaky.

A year after moving to that little town where the police took time to know the residents, I was out walking. It started to rain and it was cold. I felt relieved when I heard the squeaky brakes behind me. This officer offered to drive me home. Only he didn’t actually take me home. He pulled his police car into a dirt lot that was between my location and my apartment.

The rape was brutal. I still have physical scars from snagging my skin on his duty belt, trying to get away. When he finally stopped, he pushed me out of the car and sped away. I sat there on the wet dirt, not knowing what to do, or how to process what just happened. A police officer that I knew and trusted, who was in uniform, who is supposed to uphold the law committed a violent crime.

I walked home to my apartment, locked and barricaded the door, and cried. I didn’t want to talk to anyone or see anyone. This was uncharacteristic of me. My close friends, who were also neighbors, knew something was wrong. They knocked on the door and knew I was home. They asked me to open the door or they’d be calling the police to check on my welfare. I didn’t want to ever see a police officer again.

I remember so vividly the looks on their faces when I opened the door. I was bruised and bloody and obviously traumatized. After calming me down, they took me to the hospital where I was treated for my injuries and endured a rape exam. It was humiliating.

I was provided an advocate to be with me. Like, who do you call when the rapist is a cop? With my permission, she called a county detective who came to visit me at the hospital. The detective immediately said “Are you seriously accusing a police officer who is well liked and respected and would never do this”?

I was victim blamed by the very people who were supposed to help me. The District Attorney’s office declined to prosecute because my rapist is a “good guy” despite that a rape kit was done, I was bruised, and photos were taken of my injuries.

The victim blaming left me with deep emotional scars. To this day, even decades later, I have PTSD. I’m still triggered by the police uniform, squeaky brakes, and the smell of mud. I can’t be in confined spaces or I’ll feel unsafe.

Assaulted By a Stranger

JT, a former friend and co-director of a film we were working on about sexual assault moved in with me for 3 months in 2019.

One day she met a woman who had a reality show and a burlesque dance group. JT wanted so badly to be a famous recording artist, model, actor, reality TV “star”. Their dance performance on August 21, 2019 was at a seedy bar and JT asked me to film her performance. I did not want to go. I repeatedly told her I did not want to go. She then started to cry, saying she would feel safer if I was there. I gave in to the guilt trip.

I ended up going and I feel guilt for agreeing, considering what happened next.

I set up my tripod and camera in the front of the room. I figured I’d only be there for the 12 minute performance and then I’d leave and feel safe again.

As I was filming, a man behind me reached under my skirt and sexually assaulted me with his hand.

After JT came home from the afterparty, I told her what happened. 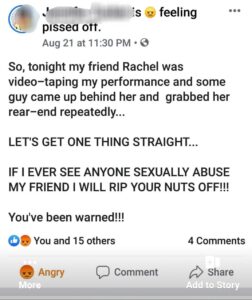 It wasn’t just my rear end. But I appreciated her support. I felt like she had my back when other people victim blamed me that very night.

“Why didn’t you tell security?”

“What were you wearing?”

I was wearing this: 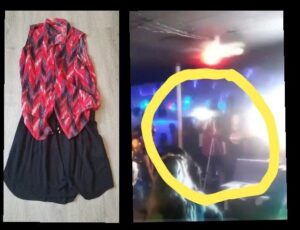 I posted this on Twitter later that night, trying to process all of this. It was a cry for help. And I saw the irony of being sexually assaulted while filming a sexual assault film. 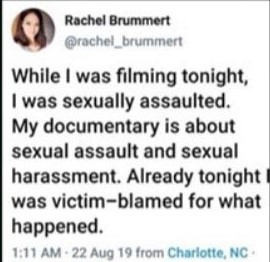 I agonized for 3 months over whether I should file a police report.

On November 14, 2019 I decided that reporting the sexual assault at Mooney’s Lounge to police was the right thing. Officer Tilson was wonderful. It’s crystal clear that he was trauma-informed trained. He gave me physical distance so I would feel safe. He asked me if I wanted a female present during my interview. He told me that I could tell him as much or as little as I was comfortable with. He reassured me it was not my fault and that I was being very brave. He gave me space when I was triggering over his uniform. He asked me open ended questions in a very gentle tone. He told me that freeze is a normal reaction; that it wasn’t just Fight or Flight. This was a very different experience than when I reported the rape by the police officer in Pennsylvania. I felt reassured by that. 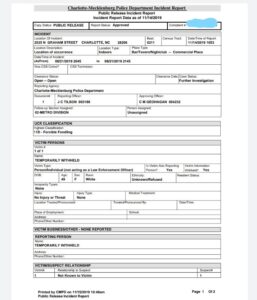 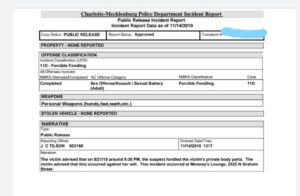 My case was then sent to Metro Division, whose jurisdiction covers Mooney’s Lounge. I spoke at length with the detective and handed over the footage from my video camera.

When I told JT that I finally reported the sexual assault, she turned white and avoided eye contact with me. She victim blamed me. She also said “you don’t want to accuse the wrong person”, which is completely true. I don’t want to do that. The thing is, he was behind me and I never saw his face. I couldn’t identify him even if I wanted to. I only know he wore a white shirt.

JT deleted the Facebook post from the night of the assault. She pretended like she never wrote that post and she knew nothing about any of this. Good thing I took a screen shot before she took it down. She then went to Metro division and victim blamed me and made me out to be the bad guy. JT’s aspirations to be a reality TV star was more important than my safety. She sided with the man who assaulted me.

The film we were working on about sexual assault and domestic violence dismantled. She pulled the plug on it and blamed me for it, posting publicly that she thought I was stealing HER film and trying to humiliate me.  A documentary that covered sexual assault, victim blaming, raising awareness, and addressing why people don’t report sexual assault abruptly ended after I was assaulted, victim blamed by my co-director, and after I reported it to police.

People often ask me if I blame JT for the August 2019 assault. The answer is that I don’t. Blame belongs solely on the man who assaulted me.

What I do blame her for, though, is not respecting my boundaries when I told her I didn’t want go that night. And for victim blaming me and siding with the man who forcibly fondled me. She put her own self promotion ahead of her friend’s safety.

PTSD stands for Post-traumatic Stress Disorder. This is common after a sexual assault.

Symptoms of PTSD include repeated thoughts of the assault; memories and nightmares; avoidance of thoughts, feelings, and situations related to the assault; and increased stimulation (e.g., difficulty sleeping and concentrating, jumpiness, irritability).

The victim blaming left me with even more deep emotional scars. I am triggered by neon lights, heavy bass in music, especially the 4 songs JT and her friends danced to, and being in a small room. I’m also hypervigilant, being fearful of someone behind me.

So, Sexual Assault Awareness Month is important and something I have- for years- participated in. It’s even more personal for me having survived both times, being the target of victim blaming, and living in a culture that breeds sexual assault.

Through frequent therapy and funneling my pain into a film that could help others -called Every 73 Seconds- I am learning healthy ways to cope and to love myself again. 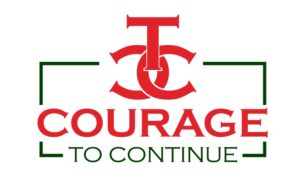